Shawn Mendes will be re-releasing his debut album Handwritten with four new songs as well as five songs recorded live from the original album on November 20th. The new release will be titled Handwritten Revisited. Shawn has also announced that he will be performing at Radio City Music Hall in New York City on March 3rd, 2016. You can read the entire announcement below. 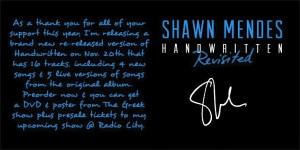