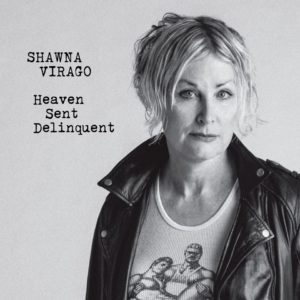 Performing as an out transgender woman since the 1990’s, San Francisco singer-songwriter Shawna Virago has released her new album titled Heaven Sent Delinquent, a 10-song collection of tracks that show off Virago’s songwriting skills and her storytelling talents. Opening with “Bright Green Ideas,” Virago mixes punk rock with acoustic tinged music, giving her tunes a rougher edge, reminding listeners of fellow transgender woman and musician Laura Jane Grace, of the Florida punk band Against Me. With her masculine and raspy punk style voice, Virago pulls listeners in not only to her world as a transgender woman, but as a performer with a purpose in mind.

With tracks such as “Burnout” which discusses being young, we only hear an acoustic guitar and Virago’s acoustic guitar, giving the song a rawness that we don’t see often, while introducing her Americana influences too, by way of a harmonica.

Tracks such as “The Pleasure Car” brings a country twang to Virago’s rock and roll style, while keeping things raw and gritty – just how Virago seems to like it. Closing out Heaven Sent Delinquent is “Land of Guns and Honey,” another Americana and country tinged number that closes out the LP with a satisfying ending.

With great instrumentation from Virago as a multi-instrumentalist, it feels as though that while she may not be out to break new ground with her latest batch of tunes, she wants to stand up for those in her community, encouraging everyone to stand a little taller and prouder, while expressing who they are without fear.

Listen to “Bright Green Ideas” below.