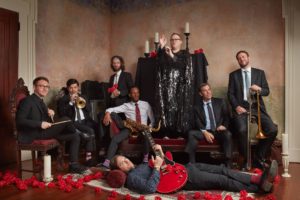 St. Paul and the Broken Bones will be releasing a new album titled Young Sick Camellia on September 7th, followed with a tour of the United States beginning on September 13th in San Antonio, Texas at The Aztec Theater. Young Sick Camellia is the followup to the band’s 2016 record Sea of Noise. You can listen to the new album’s lead single “Apollo” below, and see if the band is coming to your town.