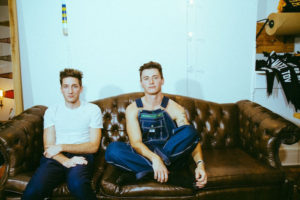 Super American has premiered their new music for “Samantha’s Song” over at Alternative Press. You can watch below. The song comes off the band’s debut LP Disposable, released last year. Filmed with a Super 8 camera, member Pat Feeley says the following about the track. “I wrote ‘Samantha’s Song’ when I was hurting really badly. Long story short, I fell in love and it didn’t end happily. I was withdrawing from the highest high I’d ever experienced as a human being.”