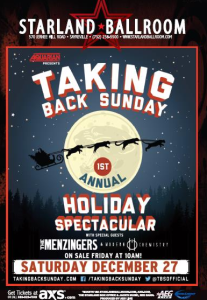 Taking Back Sunday have announced a new holiday tradition. All of the details are below.

Taking Back Sunday is pleased to announce they are starting an annual holiday show tradition this December at Starland Ballroom.

“We think it would be a fun way to combine a few things; playing in one of our favorite venues, inviting some younger east coast bands on the shows which we don’t always get to do, putting together some great merchandise sales and donating some of those profits to charity along with some other special surprises that we’ll announce later.”

Taking Back Sunday is touring all through 2014 in support of their newest album HAPPINESS IS released this March on Hopeless Records. The album debuted in Billboard’s Top 10 and the band continues to play to sold out crowds in venues all around the world. Starland Ballroom holds a special place with the band not only because of the many sold-out shows they have performed there but also because it was the first show of the US mini-tour they did in 2010 when John Nolan and Shaun Cooper returned to the band. They also filmed the electric version of their TAYF10 first album 10 year anniversary tour there last September.

Tickets for the December 27 First Annual Holiday Spectacular featuring Taking Back Sunday with special guests The Menzingers and Modern Chemistry officially go on-sale this Friday at 10am EST but a special pre-sale begins today with a link provided on Taking Back Sunday’s social media accounts.