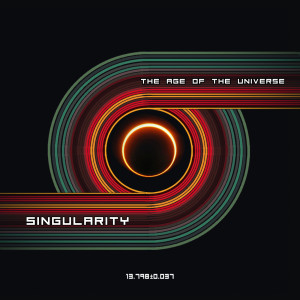 Singularity is one of those albums where once it’s over you can’t stop listening. The Age of the Universe is a hard rock band from Washington D.C, and their hard rock melodies are catchy, infectious, and incredibly addicting. Guitarist Isaac Reese, bassist Alessandro D’Ascoli, and drummer Enrico Canu is a trio that packs a lot of punch into an album that lasts a little over an hour. Playing blazing and blistering guitar solos throughout Singularity, there are times when you feel like the band is at a jam session playing with such metal legends as Black Sabbath or even Pantera, as they carry those bands heavy sounds and passion into their own music. In the bands biography, they talk about taking the time to stare at the stars and wonder about the mysteries of the universe, and with the bands spacey, atmospheric and reflective vibe, they accomplish conveying this viewpoint well. The album’s opening track “Alive” gets your heart racing with its fast drum beat and explosive guitars. Isaac’s vocals have a bit of spacey feel, while having a hint of a Freddie Mercury influence. The songs psychedelic feeling is reminiscent of artists from the 1970’s, making the members seem like they are decades ahead of their time. The band’s cinematic approach to the songs music video which tells the story of a man feeling dissatisfied with life and decides to end his life and fails, also reminds us that we must stop and take a break from everything around us before we run the risk of falling off the edge.

“Fallen Angel” has the same grit and in your face vibe as its predecessor with the exception of the change in time signature. Slowing down the overall mood and feel of the song shows their diversity and that they are comfortable going outside the box when writing music. “Say It Loud” turns up the volume, and is a perfect addition to the bands set list. Sounding very similar to Freddie Mercury once again, Isaac shows off his versatile voice and flashy guitar skills.

The albums opening track “Dreams of Tomorrow” is another slow ballad, with a soft piano in the first half of the song to give the track a lighter touch. There are really no complaints about the song except that the overdubbed vocals from Isaac don’t feel like they go well together with the rest of the track. About half way through the song, the band kicks off and goes back to its hard rock roots, which by this point, we know that they play this style of music very well. Once Singularity is finished, we know that The Age of the Universe holds nothing back when it comes to bearing their emotions. The band is a force to be reckoned with and if Singularity is any indication about where the band is going, it will be a positive road for the group.