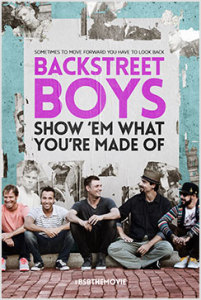 The Backstreet Boys will be releasing a documentary titled Show ‘Em What You’re Made Of to be released on January 30th,2015 (US) and on February 26th, 2015 in the UK. The film will focus on what the band has been up to over the past two years while they were recording their latest album In A World Like This. The film will also discuss their rapid rise to fame and their future. You can watch the trailer here.