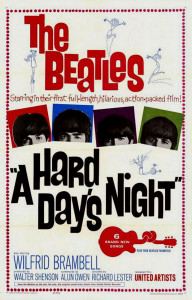 A Hard Day’s Night will be coming to a theater near you on 4th of July weekend.  To celebrate its 50th anniversary, Janus Films has digitally restored the film and remastered the films soundtrack. Giles Martin, the son of the Beatles producer, will be remastering the soundtrack at Abbey Road. The anniversary screening will be taking place in 50 cities throughout the United States.