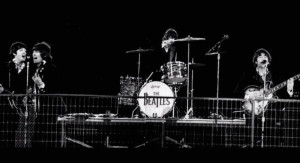 A cassette tape recording of The Beatles last show at Candlestick Park in San Francisco, California (on August 29th, 1966) has finally been put online. The tape includes an 11 song set lasting 30 minutes. To document the occasion, the band brought a camera on stage to not only take photos of their performance but also of their fans. The band also requested that their press manager Tony Barrow record the performance on a cassette, however he forgot to turn over the tape once the first side ran out, so “Long Tall Sally”, the closing song, was never recorded in full.

Today, only two copies of the tape are known to exist (the original and the copy), and one awesome individual decided to put the tape online for everyone to hear. You can listen to the show on Youtube here.

If you want to read some cool facts about the show, you can head over to Consequence of Sound.