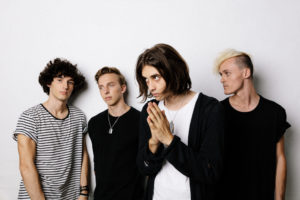 Australian four piece The Faim has dropped their new music video for “Midland Line,” which you can check out below. They will be opening up for Sleeping With Sirens from July 21’st in Sydney, Australia at Big Top and ending on April 29th at ASB Showgrounds in Auckland, New Zealand. Afterwards, they will hit the UK touring with Lower Than Atlantis and PVMNTS. All dates are below.