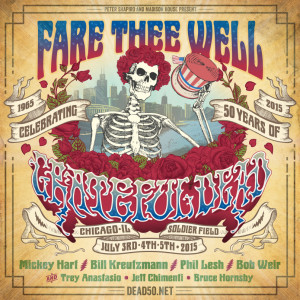 The remaining members of The Grateful Dead will be reuniting for a pair of shows in July at Chicago’s Solider Field to mark the groups 50th anniversary. To take the place of front man Jerry Garcia, who died in 1995, the band has named Phish member Trey Anastasio as front man. The band will be performing on July 3rd-5th, which will mark nearly 20 years since the bands last show with the original lineup at Solider Field. The band will also be joined by pianist Bruce Hornsby.

The band was offered $3 million to headline this year’s Bonnaroo Festival, but turned it down, saying that the July shows would be the bands last performances together.