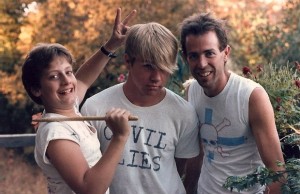 Before Tre’ Cool joined Green Day as their drummer in the early 1990’s, he was a part of a band called The Lookouts. Thirty years after releasing their album Spy Rock Road (And Other Stories) the group have decided to re-release the record. Alternative Press sat down with Lookout Records founder Larry Livermore and Tre’ to discuss the record and what it was like living in the mountains of northern California.

You can listen to the track “Story” below.