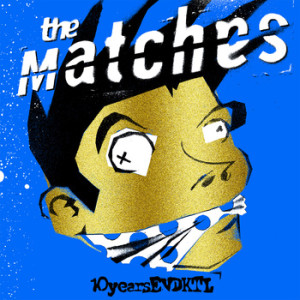 The Matches have released 10YearsEVDKTL a live recording of E.Von Dahl Killed The Locals plus some encore songs. The band also announced plans to tour Australia.

Here it is….E Von Dahl Killed The Locals Live. After 9 Sold out shows, we couldn’t leave without recording it!

It was recorded at @thetroubadour and is the album from front to back, five encore tracks from Decomposer & A Band In Hope and closing it out with Superman.

The audience these nights were so loud, it sounded like we were playing a stadium. So they brought the spirit of all the people from all the shows and combined you all into one for this recording. The audience on this tour was the 5th member of The Matches. You will hear what we are talking about

Major Big ups to @jondevoto for burning the midnight oil to mix this bad boy so we could get I out to you as well as @KmbSound for recording the show. To @ShawnandLennon and @JustinDanielSansouci for doing all the art and those rad posters and of course to @mattlikestea for booking it and doing what only he can do…always Still Matt Whalen.

If you were at any of the shows, we hope this takes you right back. If you couldn’t make it, now you can be a part of the 10 Year Anniversary of E Von Dahl Killed The Locals.

Thanks to everyone who came and helped make this so special. Press play and make it go to 11, because that’s one louder!