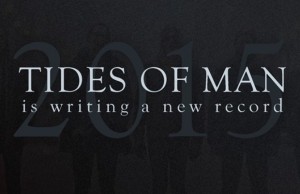 Tides of Man have announced that they are writing the followup to their 2014 instrumental album Young and Courageous. You can read the announcement below as well as watch their latest music video for “We Were Only Dreaming.”

Last February we released our first instrumental album “Young And Courageous” that was funded by our fans via our Indiegogo campaign. The overwhelming response not only gave us the ability to release our music, but opened the door to a very successful year. We had the opportunity to travel to Europe for our first time and perform in eleven countries to fans we have never played to before and play at some pretty amazing festivals.

In celebration of this past year (thanks to all of you) we would like to premier the video for “We Were Only Dreaming” here:

We hope you enjoy it! We want to thank James Rockwell for directing and filming.

Moving forward, we have started writing our new album and have plans to tour at the end of summer.

Be sure to stay tuned and as always thank you for your support!