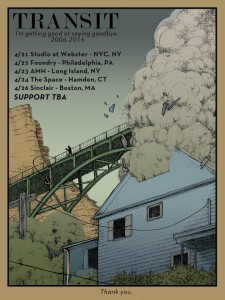 Transit have announced that they are breaking up. The band have announced one last tour which will be kicking off in April in New York City. You can read a statement below.

After ten years of writing, recording, and living on the road, it is time for us to close this current chapter on Transit, as we have decided to direct our energy into other aspects of our lives.

Since 2006 we’ve been given the incredible opportunity of sharing our music with the world, performing in over 14 different countries, and circling our own countless times.

Through all the ups and downs we have witnessed a side of humanity so caring and sincere that we now see the world in a vivid and magnificent light.

As for us as individuals, we will always love each other and the records we wrote together. We love all of you for lending an ear and losing your voices with us.

We will always be able to say that we had the best fans a band could possibly ask for. When we think about the road we’ll see all the faces and friends fly by in one big warm blur. Your stories and kind words helped push us along more than you may ever know.
April 21st to April 26th we will be performing an array of mixed songs from over the years at our final shows as a band. We have chosen some of our favorite intimate clubs to put this to rest at.

We never expected a few basement show to turn into ten years of traveling the world, playing the songs we love. For that we will always be forever grateful. We love you all and thank you.