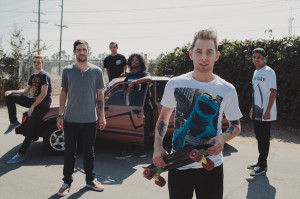 It has been announced that Tyler “Scout” Acord will not be joining Issues on tour this year. You can read statements from both Acord and Tyler Carter below.

“It’s my duty to inform you that come 2015, I will not be touring with Issues. This decision has come from a very deep place in my heart, and was in no way an easy one to make. The reasons are simply because I want to be able focus on other things musically. Touring as keys and turntables in a band is fun but isn’t what I want to be doing with my career. I have a passion for music production and drums and want to see how far I can take them. However, I will still play the same roll I’ve always had in the studio with Issues, helping to write and co produce the record. So cry not! I want to personally thank any one who has ever supported me and the band in any way; both the fans that came to the shows and the parents that took them. See you in 2015!”

Tyler Carter’s statement: “When I met Scout, he was sitting at a big screen in the Atlantic Studio B in Hollywood. We wrote some amazing things back at that place, and though I knew from day one that he was going to be my partner in music, follow me wherever I go, I knew that it was only a matter of time before he would be longing to go back in the lab where it all started. This dude is my best friend, and he’s one of the most talanted and charismatically innovative people I’ve ever known, I think he see’s the same in me and that’s why we’ve been able to do so much with this music. However, I know he has dreams, and no one should ever put their original aspirations in a box forever. He’s gotta get back to making beats, get that deal, get those placements. But this only means that the future of Issues could be a lot brighter than expected, because now my boy can really develop his sound more, and as we remember Issues’ started with the development of Scout combined with metalcore, combined with pop. Now that he has time to build himself as a producer, this only means the enhancement of the original formula you all grew to love. I love you brother, and I’m stoked for the future.”