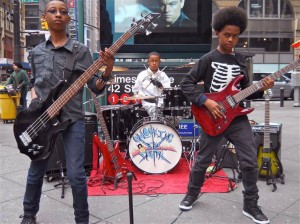 Teenage metal band Unlocking The Truth have announced that they wish to exit out of their $1.8 million dollar contract with Sony. While the group has not revealed the exact reasons for wanting out of their contract, the band has stated that there have been complications. The band will be playing SXSW this week in Austin, Texas. The teens made headlines last year after they were discovered busking in New York City and were offered the deal with Sony.