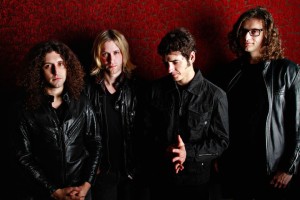 After four years, Vendetta Red have sent out a press release saying that the band is planning to record new music.

After a premature breakup of 4 years, the band was oddly brought back to life by a cell phone prank. It seems that a collection of mystery fans set it upon themselves to book a fake gig in Seattle for the band. Some members were even living out of state at the time. After a series of confusing texts, a fury of social media interest and massive pre-sale tickets, the members eventually agreed to play. After the sold out show, there was renewed energy and an idea to record together again.
The result were two earth shattering, bowel cracking concept EPs entitled “Scripture” and “Lightyear Anniversary” produced by friend and audio legend Terry Date (Deftones, Pantera, Smashing Pumpkins, Slipknot).” The band will be recording new material soon which will release this summer! There also are plans to tour this spring and summer! Be sure to check ‘www.Facebook.com/vendettared and www.vendettared.com for future updates.