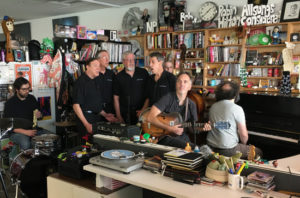 Walter Martin of The Walkmen has announced his solo album Reminiscent Bar and Grille, set for release next year on Ile Flottante Music. His fourth solo effort since going on hiatus from The Walkmen, his recent NPR Tiny Desk Concert features two songs from the album, “I Went Alone On A Solo Australian Tour,” and “Me And McAlevey.” You can watch the short concert here.