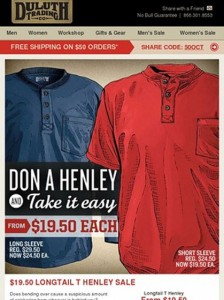 Duluth Trading Company, a clothing company based in Wisconsin, has written an open letter to Don Henley of The Eagles, apologizing for using his name without permission on their clothing. The company released new T-shirts back in October of 2014, with the pun “Don a Henley and take it easy.” You can read the letter the company wrote below. Henley is protective of his brand, and did not find the advertisement funny. He filed a lawsuit in a California court saying that the company took advantage of his celebrity and that the advertisement would cause confusion among fans as to whether or not Henley was promoting the product.

To our customers, friends, and Don Henley:

As many of you know, Duluth prides itself on not taking itself too seriously and this culture is often seen in our advertising, which we try and keep fresh, interesting, and funny. Unfortunately, we pushed the advertising envelope too far and distributed an advertisement promoting our line of Henley shirts that invoked American recording artist Don Henley’s name without his permission.

Mr. Henley has long been an advocate of artists’ rights and he brought his objections to our attention. We appreciate and respect what Mr. Henley has meant to music and we now see that our use of his name and an Eagles’ song title in our advertisement was inappropriate. For that we are deeply regretful and we apologize, not just to Mr. Henley, but to anyone else who took offense. We have learned a valuable lesson and thank Mr. Henley for helping us appreciate the importance that he and other artists place in their publicity rights.

We have, at Mr. Henley’s request, also made a monetary payment to be directed to the Walden Woods Project, in recognition of the 25th Anniversary of its founding, to resolve this matter.