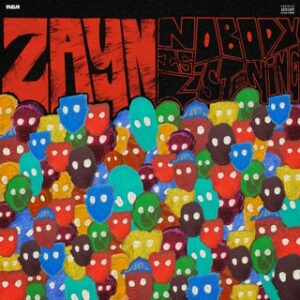 Opening with the spoken word track “Calamity” on his third album Nobody Is Listening, Bradford, England vocalist Zayn is far removed from his debut Mind of Mine (2016) and his days as a member of boy band One Direction. While it is not clear what or who “Calamity” is about, it feels like Zayn is trying to climb the latter to not only improve as an R&B artist but also to get further away from his beginnings in the slick bubblegum pop world he debuted in back in 2010.

When he left One Direction in 2015, in the middle of a world tour to take a break and have a normal life, it turns out he wanted to create his own music. With the release of Mind of Mine, it was unclear about the direction of the album, though from the album’s trailer, it would be heavily inspired by the sounds of rap and R&B, which turned out to be true. With the singles “Pillow Talk” and “Like I Would,” Zayn was finally his own man and his own artist. He is also the first One Direction member to have a solo career and not tour, however, this conscious decision across all three LP releases seems to not have tainted his popularity or career.

After releasing Icarus Falls an ambitious double album in 2018, we see Zayn come into his own even more, and while saw his talent in One Direction (he was often most noted for having the only voice that stuck out among the group,) we were able to experience the full depth of his voice on Icarus Falls. While the record would not appeal to everyone listening, it would have been hard to deny his talent, regardless of your connection to his music. Now on Nobody Is Listening, we do not feel like Zayn gives us the full range of his vocals, and the songs for the most part fall flat.

With his usual no promotion and casual drop of two music videos for lead singles “Better” and “Vibez”, Nobody Is Listening on first listen feels just as the title demonstrates, nobody is listening because none of the songs are particularly good, and certainly not at the level of his previous two efforts. However, on a second and third listen we feel like the record has its gems and feel-good moments. Tracks like “Outside” showcase Zayn’s vocals, demonstrating its highs and lows, though its not as polished as we hoped it would be. The guitar and soft drum beat compliments and does not take anything away. “When Love’s Around” features the first of two collaborations on Nobody Is Listening with Syd at the helm of the song.

This collaboration makes the song much more interesting since it adds another dimension to what could viewed as a bland and uninspired album. While this change is a welcome one, it does not make up for the fact that it feels that Zayn wanted to release something, anything, to keep his fans entertained during a pandemic. Wrapping up the album are the tracks “Windowsill,” featuring Devlin, “Tightrope” and “River Road.” All three songs conclude the album perfectly, as we hear Zayn confident in the music he is releasing. While Nobody Is Listening is by no means the best body of work Zayn has released its stamp on Zayn’s career, clears a path for what he could do next.

Listen to “Outside” below.