5 Seconds of Summer will be releasing their third album Youngblood on July 22nd. They have also announced a new North American tour titled Meet You There, beginning on August 27th in Toronto, Canada and ending on October 12th in Los Angeles, California. Tickets will go on sale this Thursday at 10am local time. You can check out the rest of the dates below. Youngblood will the followup to the band’s 2015 album Sounds Good Feels Good. 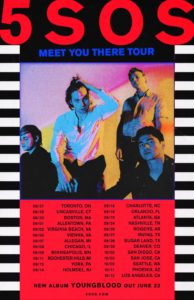