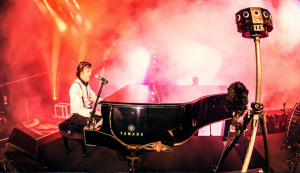 Another new concert app is coming to our phones. Macca has teamed up with developers at Jaunt to create a concert app that will let fans experience an artist like never before. The first musician tested on the app is Paul McCartney when he played Candlestick Park in San Francisco back in August. According to the app, it puts you right in the crowd, onstage, backstage, or right alongside Paul as he is performing. You can read more about the app here.