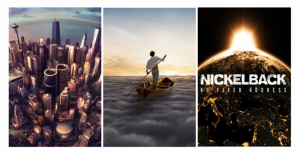 Consequence of Sound have laid out the sales for three huge albums that have come out in recent weeks. Sonic Highways by the Foo Fighters and The Endless River by Pink Floyd all received lukewarm reviews from critics, though both albums have done well on the charts. No Fixed Address, the latest release by Nickelback, which comes out today, is expected to bomb in America. The band has become the butt of jokes by music critics and fans alike, even though the band has always done well commercially. No Fixed Address is only expected to sell 60,000 copies in its first week of release. This is far under the total number of copies sold for their two previous albums, Dark Horse in 2008 (326,000 copies) and Here and Now in 2011 (227,000 copies.)

Coldplay currently holds the title for best selling rock album with their 2014 album Ghost Stories selling 383,000 copies in its first week of release.