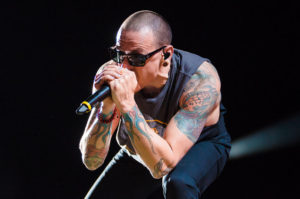 Chester Bennington of the band Linkin Park has committed suicide at the age of 41. Bennington hung himself at his home in Los Angeles, California. Throughout his life, Bennington struggled with drugs and alcohol and is survived by his six children. Linkin Park released their debut album Hybrid Theory in 2000, which included the hit singles “Papercut” and “In The End.” The band released their latest album One More Light in May.