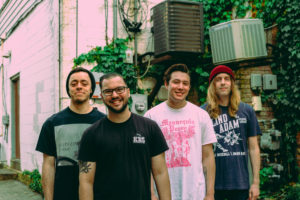 Commonweather has dropped their new single “Mellow Drama,” which you can listen to below. The Chicago four-piece will be releasing their upcoming EP Sugar Sun on September 13th. Talking about the song and working with producers Nathan Hardy and Travis Hill, front man Justin Olin says, “feeling worn out, I kept to myself more to avoid confrontation with my partner. Resentment festered and made matters worse, leaving us in a toxic environment.”

“It was our first time working with dual producers on a project and we loved the experience. Nate and Travis’ ideas for lyrics and song writing really helped shape the songs and put what we had from the initial demos into a new light. We tracked mostly everything out of Nate’s apartment except for drums which were tracked at Travis’ home studio space.”