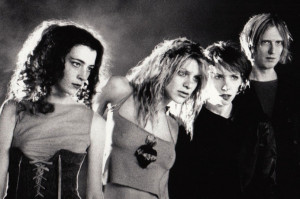 Courtney Love has plans to reunite with her band Hole in 2015. The last time the group performed together was in 2012. Now with her “nightmarish” memoir moving along slowly, it looks like Love wants to focus on other projects. Hopefully, reuniting with her band mates will be a positive experience. Love is also currently working on a solo album which is due out later this year.