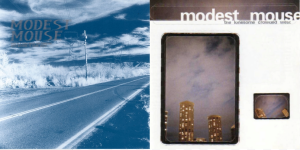 While it has been seven years since Modest Mouse released their last album, fans of the group now have something to look forward too. The band will be reissuing 1996’s This Is A Long Drive For Someone With Nothing To Think About  and 1997’s The Lonesome Crowded West on October 28th and November 4th on vinyl. Along with these reissues, the band is also planning to release new 7 inch singles that include new material from the recording sessions for both of these albums.