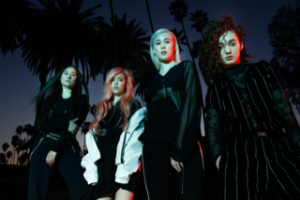 Crimson Apple, a pop band originally from Hawaii has released their new single “Can’t Get Out Of Bed,” which you can check out below. The band who is now based in Los Angeles worked with production team LYRE on the track, stating “We were really inspired by K-Pop when we were writing this song, so it definitely influenced the types of melodies and beats we incorporated in the arrangement. “As for the recording process, we were very excited to work with LYRE, who took our vision for the song and helped it come to life.”