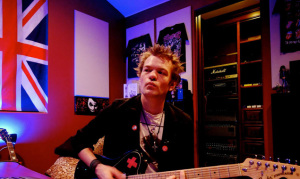 According to Rock Sound, Sum 41 front man Deryck Whibley is looking to start up his old blog called the Red Wine Chronicles, after he dug up a few of the blog posts that never made it online. On his official site, Whibley goes on to explain that “back in the day when i had some down time on the road i would sit in my hotel room or the back of the bus and reflect on some of the cool things i would see on tour, or even just random cool things i found on the internet, like old interviews of musicians etc. mind you this is also when myspace and youtube were exploding for the first time. i couldn’t believe that i could type in any of my favourite artists and see old performances and documentaries and what not. anyway i would sit with a glass of red wine and chronicle all of my stories, journals and internet findings. i called them the red wine chronicles and i would post them as blogs on myspace. haha myspace. you watch i bet it will come back!”

While he plans to bring the blog back, Whibley will be obviously be retiring the name, as he was hospitalized earlier this year for alcohol related problems. In addition to his writing, Whibley has shared a bunch of demos and old songs with fans over at his website as a thank you for their support over the years.