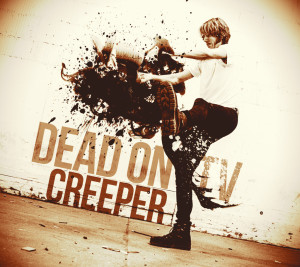 In 2012, Chicago punk act Dead On TV released their debut EP titled Fuck You, I’m Famous and would become a hit on college radio, though for anyone else who was listening it felt like the band hadn’t quite found their footing, while also struggling to find their own sound. Their new EP Creeper is the exact opposite. The bands new EP is a much more solid and rollicking release than their debut. Nearly every song is likeable, and the most noticeable difference between the two EP’s is that Creeper makes the band sound more like a solidified unit who really know how to play well. While the group is already known on college radio stations, Creeper gives the band a chance to market themselves to a much wider audience, even if punk rock music isn’t a mainstream genre. The EP opens with its title track and at almost two minutes long, the group thrashes through the tune with a really clear sense of who they are and the direction they want to take with their music. The tune is about having a stalker (while also being one) and is a simplistic track that doesn’t give fans anything new musically, but the most noticeable aspect of Dead On TV is how good the band are at playing their instruments in a genre that could be written off as clumsy or amateurish. On this release, it sounds like the group really put effort and care into each track to make it sound exactly how they wanted it to, while still keeping with punk rock’s snotty attitude.

“Screwdriver” is the EP’s third song and at this point, the band loses momentum, and adopts a slower pace that we haven’t heard before. With a fuzzy guitar riff heard throughout from guitarist Dan Evans, as well as gravely sounding vocals, “Screwdriver” does not grab us in the way that “Creeper” does, as we fully expect the group to keep on rolling out the punchy tunes, and the abrupt change in tempo may throw some fans off.

The album’s fifth song “Pale Shelter” brings us back to the bouncy, partying punk rock music Creeper opened with. Driving the track is an addictive guitar riff that we will have a hard time getting out of our heads, as we want to sing along to every word that Evans sings. Creeper ends with “I’m Easy” a muddy sounding tune that at times sounds like the punk bands of the 1970’s, when punk rock was in its prime. The sloppy and dirty sound that the tune has really encapsulates what punk rock is, and why the genre was popular at one time, as punk rock is all about doing things your own way. It is clear from listening to Dead On TV’s latest release that they could care less about what everyone thinks as long as the band and their fans are enjoying the ride.

If you would like to purchase Creeper, you can do so over at Dead On TV’s Bandcamp page.