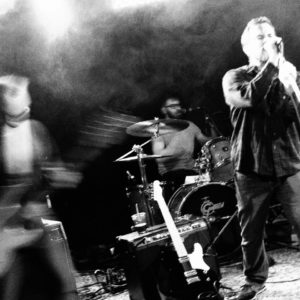 Calling themselves a band for the next generation, New Jersey rock band Dinosaur Eyelids has released their new album Left Turn On Red, out last November. The follow up to their third album Bypass to Nowhere, Left Turn On Red has hard and biting songs that shows not only the bands energy, but also their ear for writing great songs. Opening with “Day Zero”, front man Evan Staates is a musician who can compete with the big names that are an influence on the bands edgy sound, such as The Replacements, Soundgarden, Ween, and Black Sabbath.

Tracks such as “L.A. Lady” is a slower tune with pop elements, bringing a huge change to the band’s overall sound, and as the record’s fifth song, it shifts the tone of the album. Sounding more like a pop band, heading in this direction would be an interesting experiment, as the lighter sound also illustrates that the band is not afraid to try something new. Not wanting their audience to forget their musical influences and core sound, “Land and Sky” is the LP’s seventh song on the album’s track listing. With Patrick McKnight on guitar and Dan Fishtein on drums, these members drive the song’s sound, while bassist Mark Leone performs quietly in the background as he takes over the bottom end keeping right in step with Fishstein, holding the band together.

Closing with “Sourland Wind,” this is a quiet track sounding like folk and songwriting giant Bob Dylan, with its simple strumming and harmonica parts. While Dinosaur Eyelids is still a group that is up and coming, they have many achievements such as being number one on Rutgers University’s student radio station and getting airplay on 200 radio stations across America. Despite their small status, Dinosaur Eyelids are something special, and everyone should take a listen to Left Turn On Red today.

Listen to “Day Zero” below.