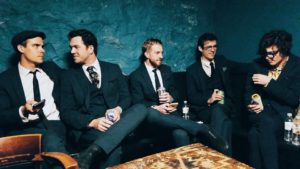 Photo by: The Doped Up Dollies

The Dull Blue Lights, formerly known as The Snails, has released the lead single from their upcoming self-titled album called “Press Play.” Commenting on the changes within the band guitarist Todd Fausnacht says, “When we started writing this record, we were one band, but by the time we finished recording, we were a different band entirely. “We unintentionally told a story of transformation and metamorphosis, which ultimately ended with us becoming The Dull Blue Lights. Drummer Josh Parry continues, “This album is a cathartic journey of a band searching for itself, and discovering that it is everything all at once. We had our fun making it, and we couldn’t be more excited to see everyone else have their fun listening to it.”