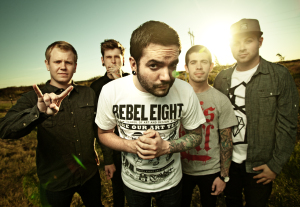 Earlier tonight, a fan fell from the balcony at a A Day To Remember show in Portsmouth, UK. According to the Portsmouth News, the band had been performing in about 30 minutes before they stopped playing. This was followed by an announcement that the show was over, and that fans had to leave the building. It was also reported that the fan had critical injuries to his head. A Day To Remember tweeted about the incident, which you can read here.