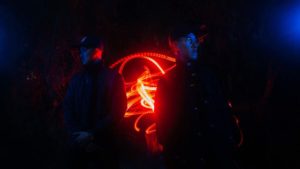 “Emerging hip hop duo” is the best way to describe Los Angeles duo Miknna who released their EP 50/50 (Side A) late last year. Mentioned in publications such as Earmilk, Mass Appeal, and DJ Booth, the first thing that comes to mind is how the band is looking to artists such Drake to write their latest effort. Making the singing and rapping hybrid popular over the past few years, the Canadian rapper has exposed music fans to a different side of rap music, bringing a melodic twist to his songs. The same can be said for Miknna, with member Mike B’s smooth vocal delivery and Ken Nana’s sharp emceeing skills, with both bringing forth something new to the rap genre. Fully submerged in the urban influence of Los Angeles, where the duo is based, each track feels ready for attentive ears to hear them.

While Miknna is new to the music scene, both members are not newcomers to music as individuals. Producing tracks from such artists as Terrance Martin and Jay 305, to producing such bands as Anderson.Paak, both B and Nana are seasoned musicians.

Opening with the song “Ness” on 50/50 (Side A,) the 80’s style song leads the way for a sultry delivery of a calming song that is the perfect opening track with a hint of a tropical feel, made popular late last year by Justin Bieber on his hit “What Do You Mean?”

“Abbot Kinney” is the EP’s third number and its electronic flavor is perfect for those who want to hit the dance floor. Much more heavy on the synths this time around, as far as its direction is concerned, this song is a lot more telling as far as where the group is going musically. Tracks such “Euphoria” brings a layer of R&B sounds into the record and while the song has great bones, it doesn’t have the energy needed to be considered for a closing number.

When watching the trailer for 50/50 (Side A,) the band introduces fans to the behind the scenes recording for the EP as well as a variety of clips that describe the release, in addition to their wide range of musical influences. The only hang-up, is that it doesn’t dive deeply into who Miknna are as a band and as individual artists, leaving a bit of mystery surrounding 50/50 (Side A.)