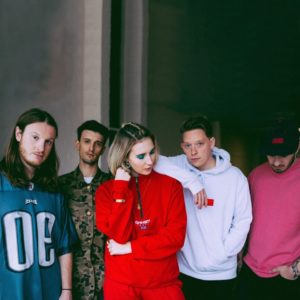 Pop band Fickle Friends has released the music video for the single “The Moment,” shot while the band was in Las Vegas on a day off. The song will appear on the group’s upcoming EP Broken Sleep, set for release on November 9th on Palmeira Records. Talking about the inspiration behind the music video, front woman Natti Shiner says, “We just finished our first ever proper US tour – Vegas was the only city that we actually got any time off and either playing a show or stuck in the van driving. We tried to film in every city we visited in the states but the Vegas lights trumped everything so we shot the whole thing there. While the others in the band gambled on the slots, Jack and I wandered around the strip filming a music video – we felt it was a fitting setting for a song about living in the moment.”