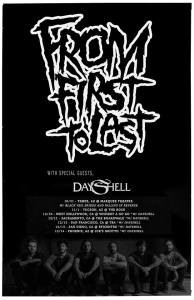 From First To Last have announced a reunion tour starting in November. Former members Derek Bloom and Sonny Moore will not be joining the band for the tour. The band are also recording a new record that was successfully funded by Kickstarter with Spencer Sotelo of Periphery taking over lead vocals. The band also rerecorded their song “Note To Self” off of their 2004 album Dear Diary, My Teen Angst Has A Body Count.