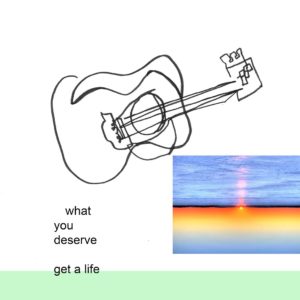 Houston band Get A Life has released their debut single “What You Deserve,” which you can stream below.

Talking about writing the song the band says, “This was a really fun song to make. From the jump, I wanted to make a banger. I wanted the drums to blast out of people’s speakers and create an instant groove on a feel-good-to-be-around-friends tip. I had the chord progression from a leftover song, as well as bits and pieces of melodic content. Lyrically, the song is reflects on the balance of work and play. It feels good to indulge when justified by healthy productivity, but as the song unfolds, in a kind of Shakespearean twist, you hear what happens when you play too much. That’s when the guitar takes the baton. It pushes things up and over the edge with a rippin’ solo, a fit of noise and technique not unlike something from the FUGAZI x Sufjan Stevens school of sound.”