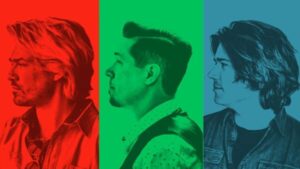 Coming up on their 30th anniversary as a band, Hanson are one of the longest running groups still making music today, and while it’s tempting to just remember them as the “MMMBop” kids, they are one of the hardest working bands in the music industry, writing not only music that is long lasting, but also building a business that caters to their loyal fanbase, with yearly events such as Hanson Day, and their fan club, which is regularly putting out fresh content. Stepping onto the scene in 1997 with their major label debut Middle of Nowhere, and exploding with “MMMBop,” its easy to dismiss them, but over the years, they’ve stayed consistent with their album releases, knowing exactly where their place is in the music industry. They may not be the most popular group, or even a band that one thinks about when listing current artists, but there’s no denying they know how to play and perform well.

On their latest album Red Green Blue, the trio of brothers has put out something different than previous records. The record consists of solo tracks from all three brothers, with Taylor the middle brother being red, Isaac, the oldest being blue, and Zac the youngest, being blue. Each section of the record offers something different, and we get to see the individual writing abilities of all three brothers. Opening with Taylor’s track “Child At Heart,” at first we don’t quite know what to make of it. For the fans that had tagged Taylor as their favorite, “Child At Heart,” comes across as a strong offering, though it doesn’t have that punch that an album opener needs to have to grab listeners and make them listen for the entire record. Next up is “Rambling Heart,” another Taylor offering, and this is by far his best contribution to the record. Bring a folky presence to Red Green Blue, Taylor shines vocally on the track, and is perhaps is his best vocal performance to date. While casual listeners may have a hard time warming up to his unique sound, fans will love it from start to finish. The harmonica also provides a softer edge, and there’s no question that this track will go over well live.

Next up is Isaac’s portion of the record, and on this particular record, Isaac is the brother who truly shines. Not only does he provide fans with great pop tunes, but he also brings a quiet funkiness that is memorable. While he remains an underrated guitarist, his skill is moved up a notch of Red Green Blue. Isaac’s lead single is “Write You A Song,” written for his young daughter Odette. It’s a sweet song from a father to a daughter, and while we don’t often know who Hanson’s songs are directed towards, this is one of the few songs where we know who the song is about. Taylor and Zac also provide backing vocals on this track as well, rounding out the tune’s colorful edges.

A few songs later, we hear “Cold As Ice,” a funky jam that brings Isaac front and center. Everything about “Cold As Ice” works, and while the guitar riff may remind longtime listeners of “I’ve Got Soul,” on 2013’s Anthem, Isaac knows how to get people dancing and to escape into four minutes of a song. As the trio pulls listeners into the magical effects of music, “Cold As Ice” becomes one of Red Green Blue’s tunes that will be added too many playlists.

Last, we are introduced to Zac’s contribution with the lead single being “Don’t Let Me Down,” with an appearance from Zach Myers of Shinedown. One of the album’s few rockers, Zac has put himself entirely into the last section of Red Green Blue. While he has shown off his vocal skills on the last few albums, “Don’t Let Me Down,” will become a fan favorite and one the best tracks in the brothers catalogue of music.

Closing out Red Green Blue is “Where I Belong,” and while Zac’s voice is strong, overall the song is boring and not how the album should have ended. Sound wise, it sounds like it should have been placed in the middle of the album as a filler track. Stylistically, it sounds different than other Hanson tracks, as it sounds purely written to showcase his vocals rather than illustrating the band’s musicality.

While Red Green Blue won’t shoot up to the top of the charts, for fans who have been following Hanson for 25 years or longer, it will be a welcome addition to the band and their discography, filled with some strong pop tunes and vocals that stand out among the radio driven songs currently playing on the airwaves.