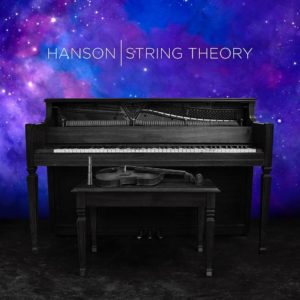 On their latest album String Theory, Oklahoma pop band Hanson have released their most ambitious album to date, a double LP backed by an orchestra. Calling the album and their current tour of the same name “a lifelong dream,” the band has released their most ambitious project yet with this release, proving that they are one of the most underrated acts in pop music. Opening with “Reaching for The Sky (Part 1)” we are treated to a solo performance by pianist and middle brother Taylor Hanson. While the trio’s middle brother and heartthrob would have sounded brilliant by himself, the strings set the tone for how the rest of the first record sounds.

Next up is “Where’s the Love” taken from the group’s 1997 debut Middle of Nowhere. Starting off with acapella vocals, the band has released plenty of great versions of the track over the years, but this feels particularly polished and the strings add a disco feel to a song that sounds tasteful and compliments its pop vibes. Thankfully “Where’s the Love” has never grown stale, though this version breathes new life into one of the band’s oldest tunes. Of course, the album wouldn’t be complete without a rendition of the group’s major hit “MMMBop,” which is String Theory’s fifth track. While the general public may be only familiar with this song, if you are listening to the band for the first time since the 1990’s, you’ll be pleasantly surprised with how the far the band come and how they continually push themselves outside of their comfort zone. While they could have easily disappeared after the popularity of “MMMBop” waned, Hanson has made a career of developing a loyal fan base that follows whatever they do on an intense level. This face lift of sorts is a refreshing take on a song that has been well overplayed for the last 20 years.

String Theory’s ninth track is “Yearbook,” a song that diehard fans have always tried to analyze. This marks the second time that the track has been performed, and this new version seems to only add to its mysterious vibe. Was Johnny murdered? Did he change schools without telling anyone? While we may never know where Johnny went, the song sounds fantastic with the strings bringing the haunting feel the band failed to capture as pre-teens and teenagers in 1997.

To end String Theory’s first disc is “Me Myself And I” a beautiful piano ballad that shows the brothers at their best. While the song isn’t the deepest they’ve ever gone lyrically, vocally they kill it as they always do, captivating their audience with every note. While it’s a beautiful end to the first disc on String Theory, it may not win over casual listeners, though hardcore fans will eat this up, one song at a time.

Listen to “Where’s The Love,” below and check back soon for a review of String Theory’s second disc.