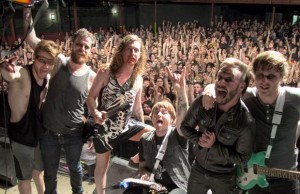 Are From First To Last reuniting with former vocalist Sonny Moore? The music world seems to think so. Last night, the bands former vocalist who left the group to pursue a solo career, played a song on his Beats 1 Radio Show that sounded similar to From First To Last. After fans heard the song, Moore who now goes by the name Skrillex, posted about an upcoming From First To Last show on Facebook, which the band shared. While the group has released new music with a new singer, they have said that Moore is interested in a collaboration, but their schedules have never lined up.

The band released their last record with Moore 10 years ago. Who knows, maybe they will reunite for an anniversary tour? Do you think they are planning a reunion? Tell us in the comments!