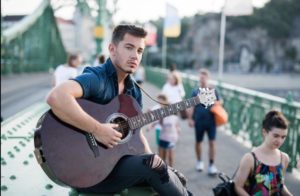 Jaimie Wilson has released the music video for his latest single “Everything Is New.” The concept behind the track is a cool one. Several years back Wilson made the transition from female to male. This past year, he discovered that he had an old recording of him singing before his transition. After hearing it, he decided to record his new voice alongside his old one, writing a song that sounds beautiful. This is his first music video.