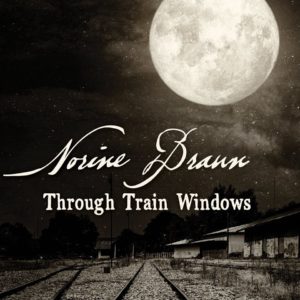 Norine Braun is a singer-songwriter based in Vancouver, Canada who was inspired to write and record her latest album Through Train Windows last year, after being a part of the Canadian Ride The Rails Tour which took her all across Canada, allowing her to explore the country’s vast nature and talk to travelers from all around the globe. After the tour ended, Braun became an artist in residence at the Banff Center For The Arts And Creativity in the province of Alberta.

Opening with “Sleeping Buffalo,” Through Train Windows begins with an acoustic softness that listeners will take to right away. With a style similar to Ray LaMontage and Bob Dylan, Braun has written 13 tracks that are beautifully written while also telling a story about one woman’s experience traveling within her home country.

Tracks such as “Climbing Table Mountain,” are when Braun introduces a funkiness to her music, complete with groovy guitars and a saxophone, creating a new depth to her artistry, demonstrating that she is not always about soft folk music. The tune is a catchy one and sure to be a crowd pleaser when she plays festivals. “Rue St. Jean,” is another exercise in writing music that sizzles. With a guitar riff that will become cemented in your head, “Rue St. Jean,” is a track that will want to make you get up and dance, reveling in Braun’s experiences as a musician, and even though we weren’t there traveling the country with her, it is songs like this that make us wish we had been. While the only complaint is that the song does become quite repetitive after a while, with vocals that could be much stronger, “Rue St. Jean,” is not a tune that Braun’s audience will soon be forgetting.

“Through Train Windows,” the record’s title track that closes the album, and it’s a great way to sum up Braun’s LP while bringing everything together. While the vocals don’t quite hit the mark that Braun was probably hoping for, the funkier and colorful tracks are where Braun’s strengths lie, releasing a rich and varied album that her audience won’t stop listening to.

Listen to “Sleeping Buffalo” below.