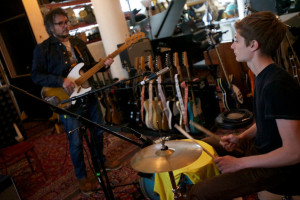 Jeff Tweedy, a member of the bands Wilco and Uncle Tupelo performed his first show with his son Spencer, who plays drums, as a duo that has named themselves Tweedy. The father and son band played their first show together on Thursday night in Detroit. After playing 13 songs from their upcoming album Sukierae, out September 16th,Jeff played a set of both Wilco and Uncle Tupelo tunes before Spencer came back on stage. You can see the set list and watch a video of the song “World Away” here.

With Band:
Down From Above
Flowering
Summer Noon
World Away
New Moon
Where My Love
Slow Love
Nobody Dies
Honey Combed
Desert Bell
High As Hello
Wait For Love
Low Key