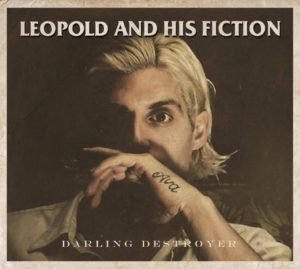 From the first notes of the opening riff on “Cowboy,” the first track on Leopold and His Fiction’s new record Darling Destroyer, music fans are in for something special. The Austin, Texas based rock group has been gaining popularity in the indie rock scene for a few years now, and their growth keeps continuing.

With Austin’s music scene struggling to survive, Darling Destroyer is the kind of album that the scene needs to keep its lifeline going. Bridging together the bands varied influences of rock, Motown, and more acoustic influenced material, Leopold and His Fiction know what makes their audience tick. “Cowboy” gets listeners feet stomping and excited for the rest of the record, giving the Austin music community the excitement it desperately needs.

“Waves (Golden”) has been played at the group’s live shows for several years, however it has finally made an appearance on a record. With a thumping bass line and a The Black Keys style drum and guitar part, the song is a simple one though it works well, when standing among other Austin blues and rock acts who release similar sounding tunes.

“Who Am I” is Destroyer’s shortest track and serves as a bridge for the last few songs on the record. Introducing a chorus of singers, we get a nice calming feel from the song and instrumentation wise, it’s one of the strongest songs on the LP. Never one to stick to the same style for long, it’s this type of variety that make Leopold and His Fiction a unique act.

“Flowers” brings in a similar sound, while giving the album a warmness that can be felt by everyone listening. Blending pop with horns to round out the song, “Flowers” is not a track to skip over, as it is one of the records best tunes.

Ending with “Boy,” rock and roll is back in full force and with an infectiousness that encourages you to move, Leopold know exactly how to appeal to their audience and bring in new fans as well. While Leopold and His Fiction have already made their way around the world to continents such as Europe, records like Darling Destroyer can take them even further, grabbing new fans one song at a time.

Listen to the opening track “Cowboy” below.