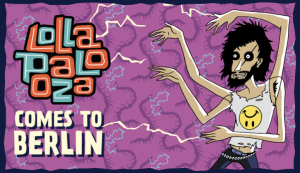 Over the past few years, Lollapalooza has expanded outside of its main city of Chicago and expanded to other countries such as Brazil, Argentina, and Chile. The festival organizers announced plans today to bring the festival to Europe. Lollapalooza Berlin will be taking place from September 12th and 13th at Tempelhof Airport in Berlin, Germany. Before the Berlin festival officially launches, South America will be able to experience the festival in March. Santiago, Chili will be getting Lollapalooza on March 14th and 15th, Buenos Aires, Argentina is up next on March 21’st and 22nd, and finally Sao Paulo, Brazil is last on March 28th to the 29th.

Jack White, Foster The People, and Robert Plant are among the rumored acts for the South America festivals.