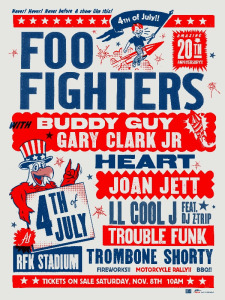 The Foo Fighters will be putting on a 20th anniversary concert on July 4th, 2015 at RFK Stadium in Washinton DC. Aside from a performance from the Foo Fighters, musicians who have contributed to the bands soon to be released album Sonic Highways will also be performing, such as Heart, Joan Jett, and Trouble Funk. In addition to the music, the band will also be hosting a barbeque, motorcycle rally, and fireworks display.

Tickets go on sale November 8th and the show is general admission. There will also be no presale. Sonic Highways comes out on November 10th. If you haven’t pre-ordered the album, you can do so on iTunes.