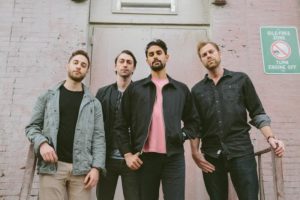 Brooklyn, New York rock band Mars Motel has released their new single “City Streets,” which you can check out below, from their upcoming EP The Eclipse Sessions EP. Premiered recently by New Noise Magazine, lead vocalist and guitarist Sarik Kumar said the following about the song. ‘City Streets‘ is a song about love and heartbreak. It was written during a time when summers felt endless, everything seemed possible, and we lived life in the fast lane without any real knowledge of who we were or who we would become. It tells the story of young love that grows apart and the sorrow of moving on.”

The Eclipse Sessions will be out on July 27th. To celebrate their new effort, Mars Motel will be playing a release show at the Mercury Lounge in New York City on the 27th.