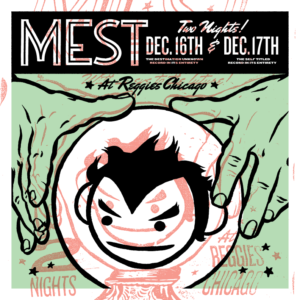 Mest  (with the original lineup) has announced two shows in their hometown of Chicago on December 16th and 17th. For these shows they will be performing their records Destination Unknown and their self-titled album in their entirety. Both gigs will be taking place at Reggie’s Rock Club. Tickets go on sale on November 11th at 10 am CST. There could also be a VIP pub crawl.