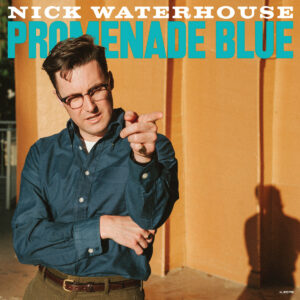 With each new album under his belt, blues guitarist Nick Waterhouse increases his skill sounding not only like a fine wine but also something you can jam to right alongside your parents if the musical time warp of the 1960’s is more their style. Originally raised in the sunshine of southern California, Waterhouse began playing guitar at the age of 12 and dropped his debut record Time’s All Gone in 2012, after living for a time in San Francisco, becoming more involved in the city’s budding DJ scene then anything we hear from Waterhouse today.

Opening up with the track “Place Names,” on his latest effort Promenade Blue, the track feels like it came screaming out of the jukebox, with Waterhouse being backed by horns and female vocals more reminiscent of the 60’s, than today. Waterhouse always feels fresh, and Promenade Blue is no exception. Up next we have “Vincentine,” a punchy jam that will get everyone dancing shaking when live music finally makes a full return. Perfect for the halls of small and intimate clubs, “Vincentine” hits us with a splash of pizazz, as the horns carry the song from start to finish. The old timey sound fits Waterhouse like a glove, and if he were born in another era, he would have no problem fitting right in.

“Silver Bracelet,” is the perfect 1960’s esque track to ask your girlfriend out to prom too, and while Waterhouse is way past the age of zits and teenage awkwardness, his talent will appeal to all ages, as long as they stop long enough and acknowledge the sound that he is trying to push through the airwaves, as his tunes stand alongside the zippy hits we are hearing currently on the radio. Closing out Promenade Blue with “To Tell,” Nick Waterhouse is a quiet tour de force, and as Justin Bieber sings about getting his weed in California and his peaches down in Georgia on his new single “Peaches“, it is Waterhouse that will create music for the ages, as he shakes his finger at the mainstream and sets off slaying into the California sun.

Listen to “Silver Bracelet” below.